No, this isn't for Michael Jackson or Farrah Fawcett. Sky Saxon of The Seeds also passed away yesterday...Thanks for leaving a mark Sky!

http://www.google.com/hostednews/ap/article/ALeqM5hfJ3F0BxJ43QilwHe11waMsP_JEQD991VAJG1
AUSTIN, Texas (AP) — Sky Saxon, lead singer and founder of the 1960s band the "Seeds," who had a Top 40 hit in 1967 with "Pushin' Too Hard," has died after a brief illness.

Publicist Jen Marchand said Saxon died Thursday but did not have other details. He was in his 60s.

The Seeds sprang up in California, and their garage-band sound with Saxon's distinctive vocals became a favorite of the flower power generation. Another hit single of 1967 was "Can't Seem to Make You Mine" and their song "Mr. Farmer" was included in the soundtrack for the movie "Almost Famous."

"All the bikers around San Diego thought the Seeds were apocalypse, then," famed rock critic Lester Bangs wrote in "The Rolling Stone Illustrated History of Rock & Roll." "I recall one hog-ridin' couple ... who didn't take the Seeds' first album off their turntable for three solid months."

Saxon had recently moved to Austin, where he played with his new band, Shapes Have Fangs.

He had been planning to perform this summer with the California '66 Revue, a tour featuring a lineup of California bands from the 1960s.

"Can't Seem to Make You Mine"

Take an hour and laugh! 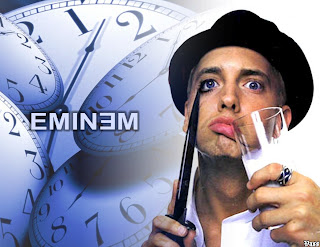 It was bound to happen...http://peeringthrough.blogspot.com/2009/05/dark-relapse.html

GLENDALE - The eerie 911 tapes have been released in the May 30 stabbing of a Glendale family. Police say that 29-year-old Michael Miller stabbed his wife and 10-year-old daughter to death. His 4-year-old son survived being stabbed 11 times.

Michael Miller told police he tucked his son into bed the night before, and said a prayer together asking God to keep them safe.

Then, the next morning, he told a 911 dispatcher, "I just killed my family with a knife. All of them. All three of them."

Miller told detectives he was possessed and he visualized his wife, Adreana Miller, as a demon. Just before stabbing her at 4 a.m., he told police he started screaming lyrics from an Eminem (M&M) song, saying, "Here comes Satan, I'm the anti-Christ, I'm going to kill you."

Miller admitted to police that when the kids awoke to their mother's screams, he stabbed them too. He said he stabbed his son Brian the most because he loved him the most.

Then he rolled a cigarette, said another prayer, and called 911, police say. He told the dispatcher calmly, "They woke up, I was threatening my wife with a knife and my kids came out, and I killed my wife and actually both my kids." Then 911 dispatcher asked him, "Are you sure you're not dreaming Michael?" He said, "I'm positive."

When asked if he had ever had these types of thoughts before, he said, "Never... It just hit me like a brick in the face. I don't even know why I did it."

4-year-old Brian is being looked after by family members and is recovering in the hospital.

Miller is expected to be charged with 2 counts of first degree murder and 1 count of attempted murder.

Wish you were Here 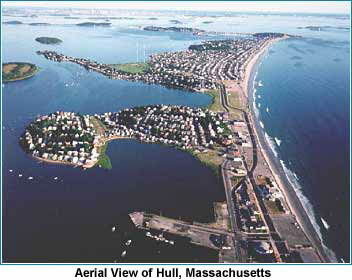 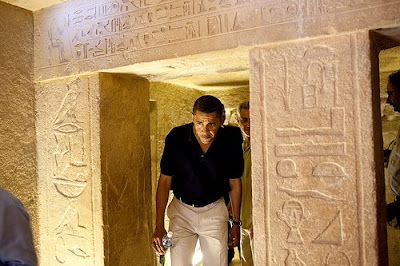 Dr. Zahi Hawass: This is a tomb dated four thousand 600 years ago. And the person who is back here, his name is Kar. His name is written in hyroglypic and it looks like Kar.

Obama: That looks like me! Look at those ears.

[He even brought Press Secretary Robert Gibbs and Senior Counselor David Axelrod over to show them the resemblance.]

Obama to Gibbs and Axelrod: I want to show you something.

Dr. Zahi Hawass: Mister President, you look like King Tut. It’s true. I said this the whole time – two years ago. You were a king in ancient Egypt.

and according to Rasta Livewire:

The name of the ancient Egyptian dignitary was Kar. One must note here that spelt backwards Barack comes up as “Karba” (omitting the “c” which is just a variation of the spelling convention). “Karba” does sound very close to “Kar” the man buried in the Egyptian tomb.

Kar lived about 4,600 years ago in ancient Egypt. Kar was a great and devoted Black African (Khemitian) who served one of the Pharaohs of Egypt. Just like President Barack, Father Kar was a priest, a scholar, and an advocate. He later became a great judge.
http://www.africaresource.com/rasta/sesostris-the-great-the-egyptian-hercules/obama-and-the-ever-resurrecting-kings-of-egypt-jide-uwechia/
Posted by FilmNoir23 at 8:45 AM 3 comments:

James von Brunn
http://www.cnn.com/2009/CRIME/06/10/museum.shooting/index.html
The Nazi climate worldwide has really cranked up over the past year or so...I will reflect back on some these stories covered here when I return in several weeks time. Stay safe.

WASHINGTON (CNN) -- A lone gunman wounded a security guard at the U.S. Holocaust Memorial Museum on Wednesday before being injured by return fire, according to police and a museum statement.

Gunfire at the entrance of the museum wounded at least two people Wednesday, emergency officials said.

A private security guard and the shooting suspect were wounded, according to officials of the Washington police.

Sgt. David Schlosser, a spokesman for U.S. Park Police, told reporters a man armed with a "long gun" entered the museum at 12:50 p.m. and fired at a security officer, and both were wounded in the exchange of gunfire.

"My understanding is that two other security officers at the museum returned gunfire at the man that had entered the museum," Schlosser said.

Schlosser said he didn't know exactly what kind of firearm the man had and whether the shooting was before or after he passed through a metal detector.

Both Schlosser and the museum statement said the wounded security guard and the gunman were transported to George Washington University Hospital. There was no immediate information on their conditions.

Emergency vehicles converged on the scene near the National Mall. See street view of the museum's location

A witness, who identified herself as 19-year-old Maria without providing a last name, told CNN she heard five shots and saw a security guard lying wounded on the ground.

"It was definitely a security guard, he was down bleeding on the floor," she said. "He was face down. His back ... blood was coming out."

Dave Pearson, a sixth-grade teacher in the Washington area, said he was on the museum's fourth floor when he heard a loud noise.

"Only thing we heard was a boom, and that was it."

A woman who did not give her name said that she understood the shooting happened inside the museum near the security checkpoint at the entrance.

She said she was quickly evacuated.

"We did see yellow tape down the hall when we were being rushed out," she said. "They came in and said we had to leave right away and they got us out."

The museum was closed for the rest of the day, and the museum statement said: "Our thoughts and prayers go out to the officer and his family."

Liberty County Sheriff’s officials are expected to meet with the FAA on Tuesday to discuss what a Continental Express pilot reported as a “missile or rocket” flying near his airplane.

A pilot reported to the Federal Aviation Administration that at about 8:15 p.m. Friday, an object passed within 150 feet beneath the aircraft, sheriff’s officials said.

The aircraft was near the southern edge of the county, flying at about 13,000 feet, officials said.

“The pilot, from what we understand, was former military. He was able to get the coordinates down real quick,” said Cpl. Hugh Bishop with the Liberty County Sheriff’s Department.

Sheriff’s deputies searched Friday night for signs of evidence where a missile might have been launched or landed.

“We couldn’t find anything,” Bishop said.