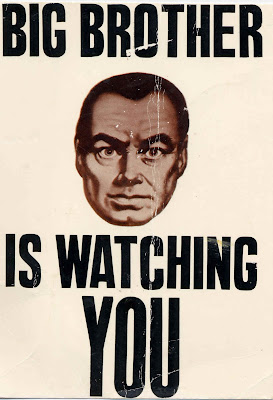 Thanks to Red Ice for this via: John D. Sutter and the folks at CNN...

War is Peace, Freedom is Slavery, and Ignorance is Strength.

Editor's Note: This is part of a CNN series called ""End of Privacy." Watch CNN today from 9 a.m.-5 p.m. ET for more "End of Privacy" stories. And please join the conversation on Twitter by replying to @cnntech or following #endofprivacy.

(CNN) -- The opening passage from George Orwell's "1984" depicts a guy hustling up a stairwell that's plastered with giant posters of a man's face staring at him.

"It was one of those pictures which are so contrived that the eyes follow you about when you move," Orwell writes in the classic dystopian novel. "BIG BROTHER IS WATCHING YOU, the caption beneath it ran."

These days, Big Brother doesn't need to do much snooping. We just tell him what we're up to. We tweet, check in on Foursquare, use digital payment systems and generally live so publicly that spying loses at least some degree of utility.

Meanwhile, we're quickly expanding the systems we've built to monitor ourselves and our environments. We connect our power consumption to the internet via "smart meters," we let Google's cameras map our streets and we use wireless gadgets to transmit vital signs to doctors.

All of that may sound horrifying. But as old notions of privacy evaporate, some benefits of a shared and monitored life become clearer. All this data has the potential to make our cities more efficient, encourage social connectedness and even aid in response to major disasters, such as earthquakes.

Here's a look at 10 ways constant monitoring and all-the-time online sharing can improve modern life. If you find this contrarian view to be downright Orwellian, let us know in the comments section.

In 2009, researchers from MIT's SENSEable City Lab tacked wireless GPS monitors onto paper coffee cups, aluminum cans and bottles of dish soap. Then they tossed that stuff in the garbage and sat back to watch what happened.

Some of the trash traveled more than 1,000 miles before landing in a final resting place. They hope that kind of info can help cities and trash management companies do their work more efficiently.

Chronic heart diseases, Alzheimer's and diabetes require constant monitoring, but doctor's visits only come about so often. Cue a new generation of wireless heath monitors that let people transmit data about their blood-sugar levels, weight and heart rate to doctors without leaving home.

Some older people have taken this idea a step further still, installing networks of sensors in their homes so someone will know if they break from the routine. If an older woman hasn't opened her refrigerator in several hours, for example, an automatic alarm might send text messages to her kids so they can check to make sure she's eating regularly.

In the aftermath of January's earthquake in Haiti, volunteers all over the world scoured the internet for information about the damage.

Public tweets -- some tagged with data about where they were sent -- as well as text messages and photos from Haiti were put on a living, updating map. This info was used by emergency responders who were trying to get aid to the places where it was needed most.

Location-based social networks aren't the most widely used services in the tech world. By the measure of one survey, only about 4 percent of internet users connect with friends on Foursquare, Gowalla, SCVNGR and the like.

But for people who blab their real-world locations on these networks, social connections can emerge. Foursquare users, for example, can look at their smartphones to see where all of their friends have "checked in" most recently. If a friend is at your neighborhood bar on a random weeknight, you might just drop in to say hello.

Once upon a time, people got traffic reports from radio DJs who spewed off the latest car crashes, usually only taking into account the major interstates. Now, a real-time traffic layer on Google Maps shows users a block-by-block view of where the backups are.

Magic? Not quite. Google relies on drivers to share anonymous information about where they are. It then takes that data, in aggregate, and figures out how quickly cars are moving on various roads and then creates a map of the flow.

Right now, most of us don't know much about our home electricity consumption. Bills go up in the summer for air conditioning and down in the winter. That's about it. But the U.S. government is in the process of deploying a smart electricity grid, which will take information about home energy use and translate it into money-saving energy tips.

One software company, called OPOWER, takes data from the smart grid and spits out home energy use reports that compare one person's energy use to that of their neighbors, on average. This data helps OPOWER's users save, on average, 2% to 3% on their energy bills.

There's often a trade-off between privacy and free services. Products such as Gmail are free because they target users with ads. Similarly, people who are willing to "check in" on smartphone apps to their favorite stores can get deals. Foursquare "mayors" -- the people who visit one location more times than anyone else -- often are eligible for free stuff. And SCVNGR app users complete check-in-based challenges that can earn them free merchandise or food.

We can't accurately predict them, but some researchers say we could respond to earthquakes more quickly if we turned huge networks of laptop and desktop computers into seismic monitors.

In a pilot project from Stanford University and the University of California, Riverside, researchers linked up at least 1,400 computers to do just that. Sensors -- either inside computer hard drives or attached to office desks -- send readings to a central database that processes them in aggregate.

The Web is so big that it can seem infinite and daunting. But by sharing the content you "like" on the internet with Facebook friends, you help them find websites, stories and videos they otherwise would have missed. Increasingly, these public preferences are visible to your Facebook friends both on and off Facebook.com. If you're logged into Facebook, now, for instance, you can see if any of your Facebook friends have "recommended" this article.

We're not the only ones who can be watched. Plenty of environmental scientists are interested in using tiny sensors, sometimes called "smart dust," to monitor nature and get a better understanding of how it works.

Sensors in California's redwood forests, for example, have taught scientists at the University of California at Berkeley about how these giant trees take in water through fog. And researchers at Intel Labs have developed a prototype smartphone that, when uploading information to the internet, including a person's location, could be used to track air quality readings in major metro areas. 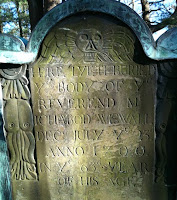 This rather intriguing story from the wonderful folks over at io9:

http://io9.com/5699875/why-is-cthulhu-on-this-300+year+old-gravestone
The Reverend Ichabod Wiswall (1637-1700) is a historical footnote. When he's remembered, it's for giving the first funeral sermon in America, in Duxbury, Massachusetts. So why is there a Lovecraftian cephalopod on his gravestone? 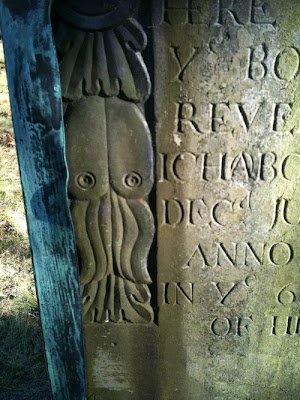 Wiswall was responsible, with the Reverend Increase Mather, for persuading Queen Mary to create the 1692 charter which united the colonies of Plymouth and Massachusetts Bay into the Province of Massachusetts Bay, which became the Commonwealth of Massachusetts. Wiswall served the town of Duxbury as a minister for 24 years and is buried in Duxbury in the Myles Standish Burial Ground, supposedly the oldest continually maintained cemetery in the United States.

The winged skull atop the gravestone is not unusual for pre-1750 gravestones, which had a range of meaning-laden symbols on them, from arrows (symbolic of martyrdom) to scallops (symbolic of resurrection). But the cephalopod, which might be anything from a cuttlefish to a squid, is seemingly unique-a search of the literature turned up no record of a pre-1750 gravestone with any version of a cephalopod on it.

It's fitting that Wiswall's gravestone has a touch of weirdness. According to the record books of Plymouth Colony, there were two Ichabod Wiswalls alive in 1667, the second Ichabod marrying Remember Wiswall that year-but the second Ichabod Wiswall disappears from the historical record after that, an oddity for the record-obsessed Puritans. The Myles Standish Burial Ground was abandoned in 1789 under mysterious circumstances-1789 of course being the year of George Washington's first inauguration as well as the year that the French Revolution began-and was "reclaimed" only in 1887. Standish himself, the military advisor to the Plymouth Colony and a man of particular brutality, seems to have rested unquietly in the Burial Ground: the initial location of his burial site was unknown, and it took three separate exhumations to conclusively discover where he lay. The center of the Burial Ground was occupied by two pyramids, although pyramids as grave markers only became common in the 19th century.

Nor is Duxbury free of its own oddities. Duxbury does not feature in any of Lovecraft's fiction; "Arkham" is based on Salem, "Innsmouth" is based on a combination of Ipswich and Gloucester, and "Dunwich" is based on Athol. But Duxbury was no stranger to sea serpents, even in Wiswall's day. The English writer John Josselyn's An Account of Two Voyages to New-England (1674) described the 1639 sighting of a sea serpent off Cape Anne, north of Duxbury, which sparked a rash of sea-serpent sightings along the Massachusetts coast, including Duxbury. And in 1857 Henry Thoreau wrote in his journal that Daniel Webster had seen a sea-serpent off the coast of Duxbury.

So it makes a kind of sense for a Lovecraftian cephalopod to appear on the Reverend Wiswall's gravestone. The only question remaining is, is Wiswall dead in his grave, or does he merely wait there, dreaming?

Manu Ginobili has started something with the UFO sighting he reported outside the Spurs’ hotel in Santa Monica, Ca, back on Dec. 1.

Trail Blazers coach Nate McMillan related his own encounter — not that close, but definitely unexplainable — with an object in the sky he couldn’t identify.

It happened when McMillan was a youngster growing up in Raleigh, N.C., in the 1970s.

[I too saw something which I recalled many years later and think to have maybe been a UFO. This was in the 1970's, and in Raleigh, NC. as well...]

“I’m not saying a UFO. I just saw something that, for me, was, well, I don’t know what I saw. “I never really said anything about it, or made a fuss about it, but it was weird to me.”