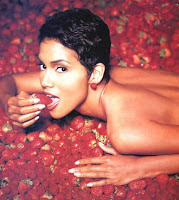 To piggyback on the fine recent works of fellow “Synchromystics” (If I may be so bold) at Sabrina's Journey, The Wrong Way Wizard, and Battling The Behemoth, I submit actress Halle Berry into the Mary/Isis pantheon with a twist. We shall see the duel masculine/feminine hermaphrodite (Baphomet) role she has taken on in pop culture.

First, Halle was born Halle Maria Berry or could we also say Holly (Holy) Mary Berry. This of course brings all kinds of things to mind.

According to wikipedia Halle was named after a department store in her hometown of Cleveland, Ohio. Now, I've heard some interesting baby name stories (as I'm sure we all have) but a department store???? What's the connection? None that I can see...neither of her parents appear to have had any connection to the said Halle's Department Store. They both worked at the same psychiatric ward (hmmm, interesting) but beyond that, not much to warrant naming your child after a store (K-Mart, Target, Wal-Mart anyone?) .

What little we do know is that Halle is of English decent on her Mother's side. Born to Judith Ann Hawkins. 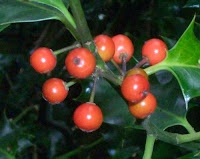 The play on Halle to “Holly” (which she even does herself in the name of her official website Hallewood.com) associates her with the masculine (Ivy is usually ascribed to the feminine) Sun God, symbolizing him in his death and resurrection. Holly was a sacred plant used to adorn the head of Saturn during the Saturnalia in Rome. We also see that the red “berries” of the holly plant represent not only the Sun but blood. Need I say more here? The amount of information required to follow the concept of blood/bloodlines or even the color red are staggering.

So, what do we make of this dichotomy? Are we to assume that perhaps there is more than a virgin mother goddess association at work, like say...a more hermaphroditic one?

There seems to be some interesting occult “play” going on with the names of many of Halle's characters as well, with some being more obvious than others. We have quite a few to choose from: Autumn Haley (The Program 1993), Rosetta Stone (The Flintstones 1994), Ginger Knowles (Swordfish 2001), Leticia Musgrove (Monster's Ball), Giacinta “Jinx” Johnson (Die Another Day 2002), and her upcoming role as the bald Venus Johnson (hermaphrodite?) in “Nappily Ever After”. (Least we forget the less name oriented characters Nikhaule/Queen Sheba (Solomon & Sheba 1995), Catwoman (2004) & Ororo “Storm” Munroe from three X-Men movies.).

Born, August 14th we see Halle as “Autumn” Haley (or Halle?) which we associate with Ceres/Demeter or in alchemy autumn is the season in which the Philosopher's Stone is brought to maturity and perfection.

From there she becomes “Rosetta Stone” which assisted us in deciphering hieroglyphic and demotic writings of ancient Egypt.

I find Ginger Knowles and Leticia Musgrove especially esoteric. In the highlands (Knowles from Knoll or grassy hill) of Papua New Guinea we see a puberty rite which involves an imaginary “Ginger Woman” playing a role in the sexual maturity of young males. For more information see: http://www2.hu-berlin.de/sexology/GESUND/ARCHIV/GUS/PAIELA.HTM

Leticia is derived from the Latin greeting (Laetitia) meaning joy, gladness or delight and also associated with a minor (?) goddess of fertility of abundance. While Musgrove comes from Old English and literally means mouse grove. Groves considered sacred places for magical worship (having played Catwoman/Bast are we seeing a cosmic drama of “Cat and Mouse” being played out within the career of Halle Berry?).

This leads finally to perhaps the most interesting of all, her role as Giacinta “Jinx” Johnson (yet again, a hermaphroditic allusion) in the 007 film (let's not forget the significance here...see John Dee) “Die Another Day” (or is it DAD?). On the surface this name seems relatively non-sexualized in the pantheon of double entendres used to represent “Bond” women, or is it? For this one, we are forced to look a little deeper...The origin of Giacinta is Italian, for hyacinth, an herb originally related to the lily family, and now classified as it's own family Hyacinthaceae; oft associated with rebirth. Named for a male (hmmm...) figure from Greek Mythology. From here, the use is a little odd to say the least...

The lad Hyacinth's beauty caused a feud between Zephyrus and Apollo, which was aggravated by the fact that Hyacinth preferred the radiant archery god Apollo. In jealousy, Zephyrus blew Apollo's discus off course, so as to injure and kill Hyacinth. When he died, Apollo didn't allow Hades to claim the boy; rather, he made a flower, the hyacinth, from his spilled blood. According to Ovid's account, the tears of Apollo stained the newly formed flower's petals with the sign of his grief.

Within the context of the film “Jinx” is so named because she was born on Friday the 13th (the unluckiest day for the all male order The Knights Templar). As far as our word origin thread is concerned Jinx may come from Latin iynx, that is, the wryneck bird, which has occasionally been used in magic and divination and is remarkable for its ability to twist its head almost 180 degrees while hissing like a snake. The Jinx bird is found in Africa and Eurasia.

And while Halle's feminine charms are possibly no where more apparent than in her obvious homage' to Ursula Andress' character Honey West (Venus & her later literal Aphrodite in “Clash of the Titans”) from “Dr. No” the underlying meanings and symbolism suggest something far more masculine about her character. Often we see Halle's characters as double agents, using her feminine sexuality to achieve her more masculine agenda. 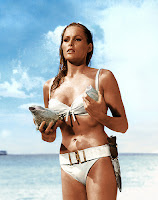 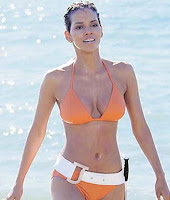 In yet another synchromystical twist, her character Jinx ritualistically offs hench woman Miranda Frost by impaling her with a throwing knife stabbed through a copy of Sun Tzu's The Art of War. Her character in 2003's "Gothika" is named Miranda Grey...oddly similar names which both invoke Shakespeare's "The Tempest" (Storm). Miranda is the beautiful daughter of the sorcerer Prospero. In this mirroring of the Hyacinth myth, Jinx becomes Zephyrus (Storm) slaying Miranda or her duel nature. Or perhaps her real life maternal parents? In "Gothika" Halle's Miranda plays the duel role of psychiatrist and patient in a mental ward. As noted earlier, Halle's parents both worked in the same psychiatric facility together.

In her personal and professional life, Halle has had her ups and downs over the years (Winning an Oscar and Razzie award all in the same year? Ouch!)...on the heels of more recent “Hollywood” meltdowns, Halle decided to capture headlines herself by announcing that she had attempted suicide (although it is my understanding that she actually was only restating something she had disclosed on the Oprah Winfrey Show previously???) over her breakup with ex-baseball star David Justice (Just US), and will don a bald head (a' la Britney Spears) in the aforementioned film “Nappily Ever After" as VENUS JOHNSON. What's going on here? What light are we supposed to see her in? Female personification of Venus or dualistic embodiment of Baphomet. The thread continues...

[In yet another tip of the hat to Ben Fairhall, I should point out that Madonna provided the theme song to "Die Another Day"

The lyrics and video serves as more of a Kabbalistic escape trick than having anything to do with the movie itself. Or does it??? ]

Yeah! Good catch on her parents being psychiatric workers. That's saying a lot. Especially in light of how the psychiatric community has links with intelligence and celebrities who are "tampered with"

Also there's this little ditty I recall from chidlhood:

The holly and the ivy,
When they are both full grown
Of all the trees that are in the wood, the holly bears the crown.

Wow, that's an axcellent ditty!!! Oddly, she was a beauty queen before actress, and I had seen a quote by her in which she said "I spent a lot of time with a crown on my head."

I can't believe the Halle Berry comment you quoted!! I wrote my article before I had read the comments to your Berry essay.

My intuition tells me it's the dual-role, Baphomet archetype that Berry most closely inhabits.

Now, can we find a trump from the Tarot (or a character from mythology) which captures this dualism most precisely, I wonder?

In Holy Blood, Holy Grail the authors point out that when run through a certain cabalistic cipher known as “Atbash”, the word “Baphomet” (written in Hebrew) renders “Sophia”, the name of the Greek goddess of wisdom.

the nineteenth century occultist Eliphas Levi’s well-known depiction of Baphomet, now incorporated into the Waite tarot deck as “the Devil.” This popular image, sometimes referred to as “the Sabbatic Goat”, was made to embody symbols of conflicting dualities.

It was very interesting for me to read this post. Thanx for it. I like such topics and everything that is connected to them. I definitely want to read a bit more on that blog soon.