Sync Winks from the Eli-tes?

A rather crappy looking new show premieres this evening in the U.S. entitled "Eli Stone", and although that may seem to make for less than an interesting launching for an article...this one seems to have some teeth; at least considering the current syncs which have rather sleekly come together. 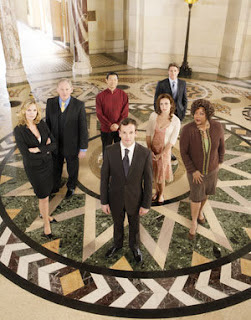 Multiple Eli's take the stage this week, will there be magick?
The show centers on a San Francisco attorney who is diagnosed with an inoperable brain aneurysm...along the way he begins to have visions, which appear to begin with singer George Michael mysteriously belting out his anthem "Faith" in Eli's living room. Each episode is titled for a different Michaels' song as well...not exactly my "cup of tea" but then upon closer examination I discovered that the first episode will also deal with the controversial topic of Mercury being a cause of Autism. The airing (tonight) of this episode seems to have hit a nerve within the medical community. A rather compelling topic from my perspective. "Someone Knows too Much"

Was Hollywood dropping a rather unsubtle hint when they unleashed this stinker on the movie going public back in 1998? Linking Mercury and autism under the guise of a government secret, action-thriller...

A cryptographic code called "Mercury" was created by The National Security Agency, so complex that its creators believe no computer on earth can decipher it. Originally created during the Reagan Administration as a test to keep the United States' highest priority secrets under wraps, their assumption is revealed to be false when they receive a message from an autistic savant boy named Simon Lynch (Miko Hughes) who calls a telephone number written in the code, which was secretly published in a puzzle magazine by two of the creators to see if anyone could break it.

As Michael from GOSPORN (one of my favorite researchers) recently pointed out to me "sometimes my skeptical nature bares fruit"...I feel, I wouldn't be doing my duty properly if I wasn't looking at the world with a critical eye, and so Michael; this one is for you my friend.

I personally think the homosexual (for lack of a better description) iconography associated with "Eli Stone" is rather important here. Something seems to be directing our attention...as it draws us directly to Freddie Mercury (the legendary lead singer of Queen) who passed away from AIDS (yet another vaccine introduced disease) within 24-hours of his public disclosure on Nov. 23rd 1991. The AIDS based organization The Mercury Phoenix Trust was created in memory of Freddie. In conjunction, the passing of actor Heath Ledger (although most likely not from AIDS) just last week comes to mind as he began his career in 1996 playing a gay cyclist on the Australian TV show "Sweat" [Queen fans might also pick-up the "Bicycle" reference], as well as reaching the height of his popularity playing a gay cowboy in the now classic Brokeback Mountain.

George Michael performs "Somebody to Love" w/ Queen at the Freddie Mercury Tribute Concert April 20th, 1992 Wembly Stadium, London
Rather powerful energies seem to be at work right now, and center around Mercury (Thoth-Hermes) and Phoenix (specifically the city in Arizona). As pointed out by Goro Adachi yesterday, Sen. John McCain (R-AZ) appears to have resurrected his bid for the republican presidential nomination after a huge victory in the "Sunshine" state of Florida as we approach the decisive "Super" Tuesday primaries on Feb. 5th (which will include McCain's home state of Arizona)...two days after the "Super Bowl" which is held this year in Phoenix, AZ.

This year's Super Bowl will match the nearly perfect New England Patriots against the New York Giants. For the purpose of this article the thing to consider is the historic significance of this game (unless McCain/AZ, Romney/NE, Clinton/NY excites you more). The Patriots are currently undefeated for the season, and if they were to win on Sunday they would achieve a feat that only one other team in the history of the sport has ever done. The 1972 Miami Dolphins being the only other team to do so...one of the members of that "Sunshine" state squad, running back Mercury Morris. Another possible sync standing in the way of the Patriots march towards perfection this weekend in the Valley of the Sun, the Giants start a legacy QB with the first name Eli, resonating with our newly unveiled "seer" Eli Stone. In the Talmud, Eli is of course considered a prophet. For more biblical implications associated with Eli click here.

On January 14th the Mercury MESSENGER (clever or just redundant?) took the first pictures ever of the "backside" of the planet...today January 31st, those picture were revealed. Referred to as the "Spider" an interesting formation of "spidery" striations and a large crater were revealed. I'm sorry but I can't help seeing this as an ANUS, rather than a "Spider". By all means however, judge for yourself. 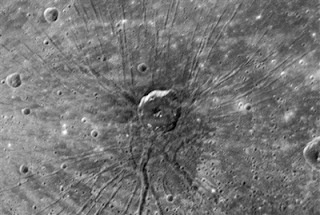 Did you know on this day in history, Ham the Chimp was sent into space in what was called "Project Mercury."

Yep, I agree. I saw that show yesterday, was gonna post but you beat me too it. The logo for the show is odd, plus George Michael is gonna be featured in the show. Drug companies were outraged that the show portrayed the vaccine autism "myth". Also lost is premiering tonight, sit back an let the phoenix energy take over.

Hi Todd, thanks for the shout out. Back at ya.

George (the dragon slayer) Michael is an interesting character. Frequently found over indulging in the bushes or behind the wheel, I love him for three reasons: he hates Elton John, he publicly mocked Blair in concert, and most of all, he said he didn't see anything wrong with a quick blow job between consenting adults.

Freddie Mercury and Queen - "We will we will rock you!" pings both football games and Eli Stone. And in Daniel, it is a small stone that breaks the Babylonian feet of iron and clay.

The "backside" of Mercury?!! That's wonderful. The male rose.

Qin Shi Huang - the first emperor of China, took mercury pills on the advice of his alchemists - thinking they were the elixir of life (AKA philosopher's stone). They drove him insane and to an early grave. Qin - Cain? Qin was a great instigator of gigantic projects, which probably makes him a sort of Asian Mason. Check out the Acura logo to see modern Asian Masons.

Hmm Mercury's backside has a giant sphincter... gayness all around. H.P.Blavasky said that the New Age Christ will be equivalent to Hermes. The New Age is of Aquarius, or rather Ganymede, celebrated homosexual love slave of Zeus/Jupiter who acted as the Eagle/Aquila/(United States). In fact the poster for Mercury Rising is quite suggestive of the man-boy-love represented by Ganymede/Aquarius.