Get used to it? 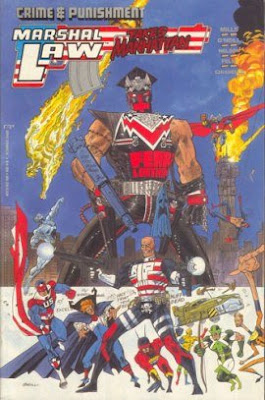 The city of West Helena, Arkansas has been under a 24-hour curfew since Thursday of last week (Aug. 7th, 2008).

Much is being made of a virtual declaration of martial law in a small town in Arkansas -- and of the ACLU's predictable, and commendable, objection to the same. Largely unnoticed, though, is the troubling fact that the "state of emergency" may create an opportunity for local criminals.

Invoking an ordinance relating to civil emergencies in response to a surge of violent crime in parts of the town, Mayor James Valley of Helena-West Helena, Arkansas, imposed an all-day curfew, with "[n]o loitering, standing or 'hanging-out'” permitted.

Less well-covered is the fact that the text of the order, available at Mayor Valley's blog, also allows for forcible evictions of people from homes where crimes have been reported.

The Code Enforcement Department has been directed to pursue Nuisance Abatement (Evictions) for those persons residing in homes, in the affected areas, where at least three (3) criminal violations have occurred within the most recent time period allowed to be considered by law.

People aren't just being driven from the streets -- they're also being tossed from their dwellings as local officials suspend fundamental rights in the name of law and order.

That's disturbing news all by itself. The cops have been given carte blanche to run roughshod over an already troubled neighborhood -- even angels would have difficulty wielding such power without trampling people's rights, and police are people, not angels.

But there's reason to wonder if some of the uniformed enforcers wandering the streets of that unfortunate community are actually opportunists. Just last month, The Daily World, the local newspaper, warned that uniforms had been stolen during a break-in at an officer's home.

“Unless you know who the person is it is a good idea to find out who’s outside before opening your door to just anyone,” said Col. Fred Fielder of the Helena-West Helena Police Department.

A state of emergency that empowers police is quite an opportunity for anybody nervy enough to simply pretend to be a police officer. It's bad enough to open your door to a government official who wants to force you from your home. It's worse to open your door and discover that those officials you have good reason to fear have simply handed a weapon to the freelance thugs.

You can view the official order by mayor James F. Valley here