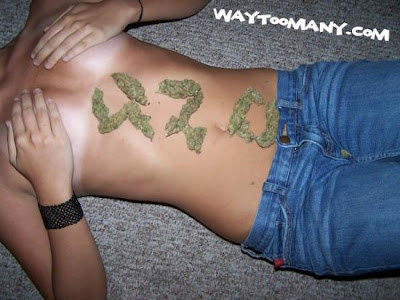 It appears the popular 4:20 smoking expression found in Cannabis (ANUBIS?) Culture most likely found it's roots in the writing of H.P. Lovecraft!

http://www.celebstoner.com/200904161957/comments/comments/even-older.html
(from above) H.P. Lovecraft, famed author of the occult and macabre, wrote a short science-fiction story entitled "In the Walls of Eryx" [which is the ancient name for Erice a small town in Sicily. Sicily having also served as the site of Crowley's Abbey of Themela], a simple story about a person exploring an alien planet. It was first published in 1939. Now, towards the end of the story, the narrator comes across a peculiar, but familiar sounding plant...

"I had encountered at last one of those curious mirage-plants about which so many of our men told stories. Anderson had warned me of them, and described their appearance very closely - the shaggy stalk, the spiky leaves, and the mottled blossoms whose gaseous, dream-breeding exhalations penetrate every existing make of mask...Although everything was spinning perilously, I tried to start in the right direction and hack my way ahead. My route must have been far from straight, for it seemed hours before I was free of the mirage-plant's pervasive influence. Gradually the dancing lights began to disappear, and the shimmering spectral scenery began to assume the aspect of solidity. When I did get wholly clear I looked at my watch and was astonished to find that the time was only 4:20. Though eternities had seemed to pass, the whole experience could have consumed little more than a half-hour."

So what? Sure...but also consider the significance of 4/20...often called the "stoner" holiday...it has the dubious distinction of sharing Occultist Adolph Hitler's Birthday...and over the years some other very interesting historical events. Be safe for the next week...the Elder Gods energy is powerful out there! The Obama White House also seems to be rabble rousing with Right Wing Radicals which is a common tactic at this time of the year too...