Double, Double toil and trouble...
Scientology is back in the news...last week, scoring a huge victory in Germany (where they are absolutely despised), after attempts to ban the quasi-religion were abandoned.

http://www.google.com/hostednews/ap/article/ALeqM5jLe9zf0UXFyG2feFmwAaY3EaGXJgD94JJL480
And then, the bizarre Swords vs. Scientology incident at the infamous Hollywood Scientology Centre Sunday (11/23/2008), where disgruntled former member Mario Majorski met his end at the hands of a gun wielding security guard after he supposedly began attacking with "a pair" of Samurai Swords.

The story gets better however, as Mr. Majorski had a past history with Scientology...during his younger days as a student, and active member of the group, he attempted to bring a lawsuit (the main tool of Scientology) against UCLA and a psychiatry professor there by the name of LOUIS West. West, a "so-called" expert in brainwashing [and accused MKultra programmer himself] was openly critical of Scientology, calling it a "pyramid scheme". Majorski "accused West of activities, including speaking to anti-cult groups, that transgressed the separation of church and state and interfered with Majorski's practice of religion." The suit was thrown out of court in 1993. 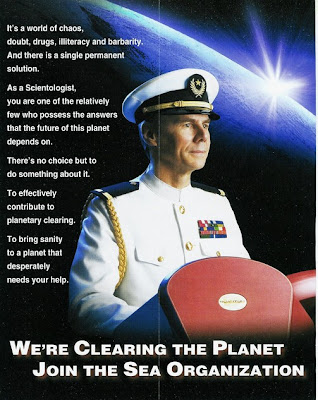 Then there is this from the Operation Clambake Message board:

John Sandbrook related an incredibly ridiculous story, one so connected to the cryptic science of the sixties, it’s darkly comical. Dr. Louis Jolyon West, during the early sixties prior to his arrival at UCLA, performed an experiment wherein he allegedly injected a 7,000 pound elephant with around 1,435 times a heavy human dosage of LSD. The elephant died.

Dr. West's career can best be described as labyrinthine, with the areas of his research covering a vast array of mental health concerns.

Dr. West devoted much energy to the study of alcoholism, hallucinatory drugs, sleep-deprivation, and violent behavior. He also researched the “hippie” culture. Many people resent his research, vexing groups with anti-psychiatric agendas such as the Church of Scientology, while others regard him as something of hero to psychiatry. West advocated human rights and was an expert on cults and brainwashing, serving as an expert witness in the Patricia Hearst case. 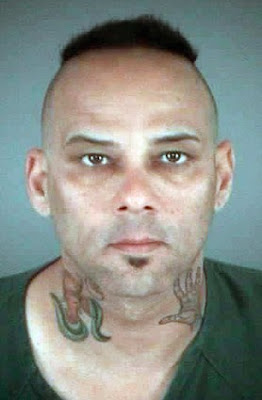 MM with MIRROR tattoos...still working on identifying them...A bleeding hand?, and a MERMAID or something "fishy" in nature...
Majorski then appears to have fallen on hard times over the next decade or more...losing his father, filing for bankrupcy and then his mother just this past year (a loss of 2 parents). He was however able to maintain homes in 2 different states (California and Oregon) and drive a rather expensive looking red convertible...according to a Scientology spokesperson, since 2005, Majorski had made over a dozen threats to "churches" (?) in both states.

On Nov. 2 of this year, Majorski was arrested at a Mormon church service in Florence, Ore., the coastal town where he lived A Florence police spokeswoman told the Associated Press that he was "cursing and moving around a lot" and was charged with disorderly conduct and criminal trespass. Less than a month ago, he was arrested in Florence for swinging an ax at an Auto Club employee who was bringing him gas for his car. Majorski threatened to shoot police who went to his home to investigate, according to a police report. He pleaded no contest to disorderly conduct.

http://www.latimes.com/news/local/la-me-scientology25-2008nov25,0,7339011.story
In a bit of mainstream sync reporting Therese Lisieux of CelebGalz.com uncovers this absolute gem.

The Scientology church member, Jenna Elfman had acted as a fictional character named Lisa MAJORSKI, in the 1993 (the same year Majorski filed suit against UCLA) made for TV movie, Double Deception.

***I would be remiss without also mentioning SuperStar Scientologist Tom Cruise appeared as a Samurai Sword wielding kill machine in The Last Samurai...

Nice work, very thorough. Did you see Jenna Elfman's role in Anthrax's Black Lodge video... couldn't be more blatant really. I was thinking about the name Mario; as in a Marionette Puppet... you control Mario in video games like a puppet, hence his name? And this Mario is basically a ritual puppet for sacrifice here, so I'm wondering if there's some connection there also.
Thanks alot, fascinating stuff as always.

And Tom Cruise in one of the main scenes of that movie, took on 5 adversaries, armed with two samurai swords. :-)