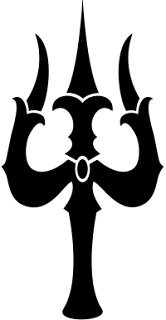 The Indian trident or Trishula of the Lord Shiva

It's been well over a year since my last TRIDENT Alert but developments overnight in Mumbai, India (formerly recognized as Bombay) have resurrected these extremely violent events. A well coordinated siege at 10 or more locations around the metropolitan financial center has claimed the lives of 125 people, while official reports as to an end of the bloody standoff have changed throughout the morning. Fires, gunfire and explosions raged on as Thanksgiving Day dawned in the United States.

The Oberoi TRIDENT Hotel was one of the targeted sites along with the majestic 105 year old Taj Mahal Hotel (according to wikipedia, The Beatles and Elvis Presley are listed among the famous guests to have stayed here), as well as a hospital, train station and a Jewish center.

The actual Taj Mahal is located in Agra, India and was constructed in 1648. It served as a mausoleum, and was built during the rule of Mughal Emperor Shah Jahan in memory of his favorite wife, Mumtaz Mahal.

It is believed that the assault on Mumbai originated as a water based operation. The perpetrators are thought to have deployed from a ship, the MV Alpha, in smaller speed boats filled with caches of weapons and ammunition.

Obviously this is an ongoing event...does the mystical region of KASHMIR play into what is unfolding in Mumbai currently? Also, see Goro Adachi's ETEMENANKI for his unique take on what is being dubbed "The Mumbai Massacre" by the media.

***UPDATE*** Ben Fairhall at The Daily Behemoth has provided a great post to the ongoing TRIDENT event in Mumbai, India

***UPDATE TWO*** Loren Coleman at The Copycat Effect brings a spiritual angle to the ongoing crisis...
http://copycateffect.blogspot.com/2008/11/indias-911-synchronicity-and.html
Posted by FilmNoir23 at 9:24 AM

I deliberately avoided both yours and Loren's site whilst I was writing the 'Mumbai Reflections' post because I had a feeling you guys might also be on to it, and I didn't want to 'spoil the transmission' (as it were.) I haven't looked at Adachi's angle, but thank you for collating some of the posts on this subject from the different outposts of the synchrosphere and adding your own info to the mix as well.

I paid relatively little attention to this story as it was happening, but little bits and pieces- unconsciously assimiliated- here and there came together in sufficient volume to warrant the short article. Yesterday I had the same prompting vis a vis the Oberoi Hotel, which (as you have noticed) has caught the attention of the public more than the other locations, with the possible exception of the Taj Mahal Hotel. I'll be posting something on the Oberoi specifically on my daily blog tomorrow, Shakti willing.

Thanks for your support... I'm unable to write long articles at the moment, but that seems to be a good thing. Sometimes several short bullet point-style posts can be much more effective than a colossal screed.

Hello!
Very interesting post.
Take a look on the thread on the Synchromysticism Forum about the Mumbai Massacre/MM/2K. http://synchromysticismforum.com/viewtopic.php?f=5&t=436&start=0
Pluto moved along from Sagittarius to Capricorn on November 26 (or it might be November 27). The Shiva/Pluto symbolism of the event is obvious.

Who are we to say that killing hundreds of people every month in the name of Allah is the height of evil? That is just their culture and ideology and it MUST be respected. Morality is all relative, we must remember that.

Earth is one of many
in process of conversion

.
absurd thought -
God of the Universe wants
many Taliban planets

.
absurd thought –
God of the Universe says
convert the infidels