Working closely off of the research of Loren Coleman from his HIGHLY insightful site, The Copycat Effect; some oddly disturbing developments have surfaced today. After some memory searching, the recent murder of Arkansas anchorwoman Anne Pressly struck me with some haunting details which may have originally escaped the story as it currently stands. [For those reading unfamiliar with the Pressly murder, I suggest following the link below] 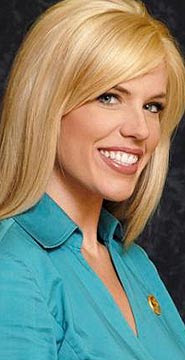 Pressly won her role in W. (Oliver Stone's new movie about George W. Bush), which was filmed in Shreveport, La., when she went to the city for a story on the movie and Shreveport's film industry. She appears briefly as a conservative commentator who speaks favorably of President Bush's "Mission Accomplished" speech. KATV's Web site notes that Pressly's most notable interview was with Vice President Dick Cheney. Pressly was returning from a story in Humphrey and traveling through STUTTGART (Arkansas), where the highway was blocked in front of hunting supply store Mack's Prairie Wings. It turned out that Cheney, an avid hunter, was inside. Pressly asked for an interview, which she conducted in the ammunition aisle.

The day of the Pressly/Cheney interview was December 5th, 2007...on that very same day, something sinister was afoot in OMAHA, Nebraska.

http://copycateffect.blogspot.com/2008/10/pressly-connecting-dots.html
On that same day, on Wednesday, December 5, 2007, at the Westroads Mall in Omaha, Nebraska, Robert A. Hawkins, 19, killed nine (counting himself). He used a hooded black sweatshirt to sneak in the AK-47 he used. SWAT teams were able to respond quickly to Omaha's Westroads Mall shooting because they were on high alert due to President Bush's quiet visit to the Nebraska city. President George W. Bush was in Omaha, Nebraska, on the morning of December 5, 2007. While in Omaha, Bush visited the OneWorld Community Health Centers, a clinic that provides medical, dental and nutritional aid. Bush was mainly in Omaha to support candidate Mike Johanns for the United States Senate. The Johanns fundraiser was held at the large estate of billionaire businessman and philanthropist Walter Scott Jr. It was closed to the media. Reportedly, Bush also went shopping - perhaps at the Westroads mall for a scarf or tie, supposedly. Soon after Bush departed, a mall shooting occurred at the Westroads Mall.

For anyone intrigued by this "sync", I would suggest that you recall also, the posts from across the pond by wordsmith Ben Fairhall; with his brilliant dual fold work on this subject directly (as well as others happening during the same period of time):

http://ben-fairhall.blogspot.com/2008/06/highway-666-revisited.html
On other fronts, the "supposed" foiled Neo-Nazi plot of murder and mayhem, which was to include President to be Barack Obama also fell into the memory hole when one of the suspects in the ATFB bust turned out to be from West-Helena, Arkansas. Back in August of this year, I posted about the city lockdown in that small city which more or less could be seen as a declaration of Martial Law.

The Crossing of these stories in my mind is NO accident...Loren Coleman materfully connects the dots between the Obama plot, the two Finnish School shootings in the past year, and the climate of Arayian angst that seems to be infiltrating the fringes of world culture in his article entitled "Plan 88: The Plot to Assassinate Obama".

In a bizarre attempt on my part to make sense of both stories, I decided to concentrate on "Germanic" culture, and the December 5th date...the result is the mythic celebration of "Krampus" . Celebrated in the Central and Eastern Alps of Europe, the demonic companions of St. Nicholas are still to this day a part of the culture. 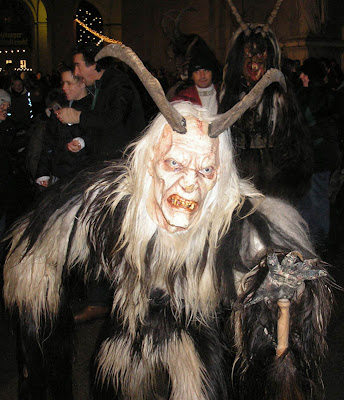 Typical representation of Krampus, a possible "Arayian" link to Dec. 5th events?
The word Krampus originates from the Old High German word for claw (Krampen). In the Alpine region the Krampus is represented by an incubus in company of Santa Claus. Traditionally, young men dress up as the Krampus in the first two weeks of December, particularly in the evening of December 5, and roam the streets frightening children (and adults) with rusty chains and bells. In some rural areas also slight birching especially of young females by the Krampus is part of tradition.

I want to thank Loren Coleman for updating his own articles with my additions, as I was busy with my 8 to 5 job. I will do my best to keep tabs on things as we progress towards the November 4th election; which is most certainly at the heart of most of these racially charged events. The ramifications of this election for either side are sure to be felt world wide.
Posted by FilmNoir23 at 11:31 AM

Very interesting, thanks for this, I was hoping to read more about each of the topics connected here. I'll check out the links to copycat now, see you 'round the synch-o-sphere.

A clawed figure - a connection to the North Pole - threatened assassination of Obama - these themes are all very strongly connected in my work on the "Nightmare on Elm Street" synchs related to Obama/Lincoln/JFK at the Synchromystic Forum. What is very interesting to me is that the Presely attack occurred at the same time that Lisa Marie Pressley's twins were born and at the same time that an ancient Roman head sculpture that resembles Elvis was auctioned off.

Another ominous connection to the "Nightmare" thread is the fact that Elvis "the King" died at the age of 44 - 44 is a big part of this presidential death/decapitation thing. Elvis's famous "Aloha from Hawaii" TV special was broadcast live on 4/4/73 - the anniversary of the MLK (milk - King) assassination - "Elvis is in top form physically and vocally in, arguably, his greatest career moment."

I just can't help but see a connection between this anchor's death and this other thread.

And that reminds me, Sarah Palin was once a news anchor. Goro Adachi has connected her to the decapitation/milk/North Pole themes.

This is really crazy. The Elvis Presley, Hawaii, 44 synch ties in with my latest Blue Hawaii post, written before seeing any of this. Jesus was supposedly crucified when he was 33.

"The Johanns fundraiser was held at the large estate of billionaire businessman and philanthropist Walter Scott Jr."

Johannites were associated with Templars I think, who were followers of John the Baptist. Sir Walter Scott... those Brits are always swimming around in this stew.