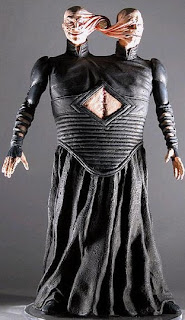 For anyone dealing with the shadowy workings of The Secret Commonwealth or general "conspiracy" research at large, the topic of Bloodlines is one that will ultimately cross your path. People from all walks of life seem to be fascinated with the subject as well; the tracing of family trees becomes an obsession for many, and even New Agers seeking past life regression therapy seem to cling to the well beaten path of histories most notable personages (Specifically Cleopatra, who consumated with Caesar/Kaiser and Mark Antony with whom she conceived TWINS...see Jennifer Lopez as resonator).

One side of the bloodstained trail being left to us on this journey as "seekers" which has been almost seamlessly integrating itself into the very fiber of our culture today is the phenomena of TWINS. The synchromystic circle has been particularly struck with the concepts of mirroring or doubling, a logical result of the destruction of the mother of all TWINS on 9/11, 2001. Even the location of the "Mega Ritual" laughs in the face of conventional wisdom...quoting German New Waver and UFO guru Nina Hagan: "a city so nice they had to name it twice" New York, New York. 9/11 skeptic and dream weaving wizard David Lynch was prepping us for this period when he changed the face of Television with his doppelganger laden labyrinth "Twin Peaks"...if anyone taught me to read a new language it was him.

Then, this week, TWINS made news multiple times, obviously "peaking" my interest. The story that started things, and to which I have not commented on until now was the rather disturbing "Boys from Brazil" piece on the "TWIN town" of Linha São Pedro which author/historian Jorge Camarasa suggests is the result of renegade Nazi Josef Menegle's twisted medical experiments. In an odd way, I was almost expecting something like this to rear it's polycephalin heads in the current Weimar Republic climate which we find ourselves ever closer spiraling towards [Of course, I also was envisioning a Giants vs. Titans Superbowl at one point too, so I could be hopelessly chasing Windmills on this idea as well...let's hope so!]. But, I digress...

In response to Mr. Camarasa's Ira Levin inspired "theory" (who by the way also introduced us to Rosemary's Baby and The Stepford Wives), the Truth Think white coats bring us back to more acceptable modes of belief with the following:
quotes from New Scientist online linked below
From 1990 to 1994, the proportion of twin births in Linha São Pedro was 10%, compared to 1.8% for rest of the state of Rio Grande do Sul.
"Even though we could not find a definitive explanation for this higher incidence, the existence of other 'twin towns' around the world – most of them in remote isolated areas with high levels of inbreeding just as Linha São Pedro – shows that external influence is not needed for this to happen," geneticist Ursula Matte says.
Her team interviewed and conducted blood tests on 17 of the 22 pairs of twins living in Linha São Pedro, around half of which were identical twins.
Genealogical analysis showed a high recurrence of multiple births within families, as well as a high level of inbreeding within the community, suggesting the presence of genetic twinning factors.
The high level of inbreeding, combined with an absence of twins every other generation would suggest a recessive trait, Matte adds.
http://www.newscientist.com/article/dn16492-nazi-angel-of-death-not-responsible-for-town-of-twins.html
Inbreeding indeed...now, where might we have also heard this type of behavior takes place...other than say, "isolated" and implied poverty stricken areas of the globe...? Dare I even say it? The Elite Bloodlines...the holiest of holy, the Ivory Towered Secret Commonwealth. I must be crazy...
Of any possible Teutonic origins? The article continues:
Although Camarasa argues that the high prevalence of blonde hair and blue eyes among the twins could be evidence of Mengele's "Aryanising" influence, Matte points out that the village was founded by German immigrants who often have such features.
"In addition, I don't think Mengele would have the knowledge, not to mention the means, to engender the rise in twin births in this community," she says. "It's noteworthy that twin births occurred there in almost every time period, even in the 1990s, so what kind of long-lasting manipulation could he have perpetrated?"
Twin births have been linked to exposure to toxic waste and increased use of IVF, but even now, says Matte, we don't fully understand the mechanisms involved, "and it is extremely hard for me to think that Mengele would have known it in the late 1960s," she says.

On the heels of this rather sordid bit of business, we stumble to the feet and cloak of Kaiser Permanente (Forever or Permanent KING even???) who made headlines TWICE this week...Once in the horrific story of Ervin Antonio Lupoe's desperate meltdown covered here (and involved not one but TWO sets of TWINS), as well as it's role in the Kalifornication Octuplet birth; also mentioned in the same article. All of which followed Elitist Nancy Pelosi's call to the masses for birth control to save the American economy...what a week, oh, and it's only half over. Happy Hump Day everyone!
I leave you with this...[PLEASE :Do not send me or comment with extra additions to this list unless it pertains to a particular thread or includes material which YOU would like to work on in conjunction with me. Thanks!]

For some numbers on the rising of the twin in modern culture:
http://www.sideroad.com/Babies/twins_multiple_births.html

Don't know if u read the story from Brazil last week about a town full of blond twins.

Yes, the Brazil story is one of the main cruxes of this post.

Interesting. I'm a twin (a [b]fraternal[/b] twin (hinting at secret societies?)) and my mom's side of the family almost certainly had some incestual marriages. They were the "rich white people" in Ecuador; light skinned, descended from Spanish blood, and possibly descended from Sephardic neo-Christian Jews. So, they had to 'keep the money in the family' by marrying close to the bloodline. I don't know how many twins there are though, and I doubt there's been much inscest in that part of my family in recently history, but it's an interesting link.

PS. I don't believe there's any portugese or Brazillian blood in my mom's side of the family.

Good Day!!! peeringthrough.blogspot.com is one of the best innovative websites of its kind. I enjoy reading it every day. Keep it that way.